The Association is honored to be a member of the 2016 list of inductees into  America’s Pop Music Hall of Fame!

We are pleased to join 15 others and were chosen by a national music industry panel of musicians, disc jockeys and journalists based on the breadth, depth and influence.

~ Thank you to those who nominated and voted for us! ~

The Association was included in the Los Angeles Times’ list as one of the best top 50 Los Angeles formed bands.

I never felt these songs lent themselves to the style of either of the groups I was in at the time; The New Christy Minstrels or The Association so I thought I'd record them someday & did. 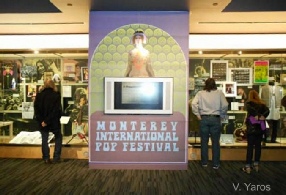 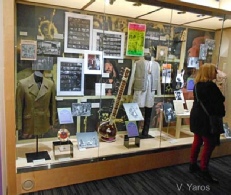 Thank you V. Yaros for the use of your photos!

Russ wanted to share this photo (thank you Valerie!) taken 11/23/19 and the following message:

"Terry and I visited with the band before they went onstage at The Rose in Pasadena, California, on Saturday November 23, 2019. They’ve added “Requiem for the Masses” to the show — It’s still so powerful. Also attending was cinematographer Steven B. Poster who took the first photos of The Association in 1965, photographing the group for the first time in 54 years!" 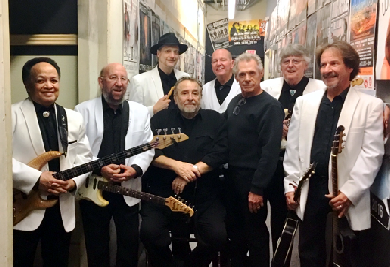 Russ’ book, “Along Comes the Association: Beyond Folk Rock and Three Piece Suits” co-written with Ashley Wren Collins and published by RARE BIRDS BOOKS is now available on Amazon!

A message from Russ:

My book, “Along Comes the Association” was officially launched on March 10th, 2021. I had a box of books which I mailed out to many of the contributors and the guys in the band.

Danny Hutton called me on Wednesday March 11th and told me I had used Corey Wells’ name instead of Chuck Negron, my mistake (pages 301 and 302). Corey was a straight arrow, Chuck Negron was the member that triumphed over heroin.

Bless you and THANK YOU for reading my book!
Russ

Once again The Association is proud to be part of The Happy Together Tour. This year’s tour 2022 will have members: Jules Alexander, Del Ramos and Paul Holland representing The Association.

Paul is standing in for Jim who is still recovering from Covid and is unable to tour right now. He’s doing great, appreciates everyone’s well wishes and can’t wait to get back on stage!